WHAT IS THE NEOCATECHUMENAL WAY?

A THEOLOGICAL-CATECHETIC SYNTHESIS AMONG THE MOST POOR

The Neocatechumenal Way was born in 1964 in the shanty towns of Palomeras Altas, near Madrid (Spain). The environment of the shanty towns was formed by the most degraded layers of society: gypsies and “quinquis” (largely illiterate), homeless, thieves, prostitutes, young criminals, immigrants, etc. In this environment, the seed of the Neocatechumenal Way germinated. Among the poor and marginalized who received the announcement of the dead and risen Christ, Kiko and Carmen how the Holy Spirit started a process of Christian initiation, in the image of the catechumenate of the early Church.

In the early 1960s, Francisco José Gómez Argüello (Kiko), a Spanish painter, winner of the Special National Painting Prize in 1959, after a deep existencial crisis, discovered in the suffering of the innocents the mystery of Christ Crucified, who is present in the last ones of the earth This experience led him to abandon everything and, following in the footsteps of Charles de Foucauld, he went to live among the poor in Palomeras Altas.

In this process he receivedan inspiration from the Virgin Mary: “We must make Christian communities like the Holy Family of Nazareth, who live in humility, simplicity and praise. The other is Christ. “

Carmen Hernández, also a Spaniard, was a graduated in Chemistry, and studied at the Institute of Missionaries of Christ Jesus. She also graduated in Theology with the Dominicans of Valencia and there she discovered the renewal of the Second Vatican Council through the liturgist Mons. Pedro Farnés Scherer.

After two years in Israel, living with Jewish people and experiencing their traditions and the places of the Holy Land, she returns to Madrid with the hope of forming a missionary group to evangelize the miners of Oruro (Bolivia), as requested by the then-archbishop of La Paz, Mons. Jorge Manrique Hurtado. Through a sister of hers, she comes into contact with Kiko Argüello in the Palomeras shanty towns. She built a shack on the wall of a factory and began to collaborate with him.

The artistic temperament of Kiko, his existential experience, his training as a catechist in the Cursillos of Christianity combined with the impulse of evangelization of Carmen, her theological preparation and knowledge of the Paschal Mystery and the renewal of the Second Vatican Council, together with the environment of the poorest on earth, constituted the laboratory that gave rise to a kerygmatic, theological-catechetical synthesis, which is the backbone of this process of adult evangelization that is the Neocatechumenal Way.

Thus was born the first community founded on the tripod: Word of God-Liturgy-Community, leading to fraternal communion and mature faith.

a. This new catechetical experience, which was in the line with the renewal inspired by the II Vatican II Council, was welcomed by the then archbishop of Madrid, Mons. Casimiro Morcillo, who encouraged the initiators of the Way to spread it in the parishes that requested it. The experience extended gradually in the archdiocese of Madrid, in Zamora and in other Spanish dioceses.

THE WAY ARRIVES IN ROME

b. After the first community was formed among the poor, and Kiko and Carmen were invited by some parish priests of Madrid to bring this experience to their parishes, as in Zamora in different environments, they moved to Rome with the help of Mons. Dino Torreggiani, founder of the Institute of the Servants of the Church (congregation of priests dedicated to the pastoral care of the marginalized, gypsies and migrants), whose process of beatification is currently ongoing

b. Torreggiani met Kiko and Carmen in Ávila (Spain), and attended to the catechesis given in the parish of Santiago, in the years 1966-67. He recognized in the experience of Kiko and Carmen an answer to the need for evangelization of the most far away, and invited them to Rome, where they went accompanied by a priest from Seville.

Before embarking on the trip, they met with the then-Archbishop of Madrid, Mons. Casimiro Morcillo, who had helped Kiko and Carmen in the shanty towns and had encouraged the Way to continue extending into the capital. Morcillo handed them a letter of recommendation for the vicar of the Pope in Rome, Cardinal Angelo Dell’Acqua, and another for the Cardinal of Florence, Ermenegildo Florit

Kiko and Carmen arrived in Rome in July of 1968. Shortly after their arrival, Torreggiani took them to the Virgin of Pompeii Shrine (Naples) to entrust their mission to this Marian shrine which was so popular in the country.

Don Dino accompanied them to visit some parish priests, to whom they explained what the Way was and how it had begun among the poorest in Madrid. However, the renewal of the Council was not yet fully understood and they were not easily welcomed. It was then that Kiko felt God’s call to go back to live among the poor, and he moved to Borghetto Latino in Rome, waiting for the Lord to manifest His will.

After Kiko settled in this degraded area of Rome, several young people were impressed by his experience and invited him to a congress of base communities in the town of Nemi (on the outskirts of Rome).

There, in a room full of young people – most of the leftist ideology – they asked him to give his testimony. Later, some of them invited Kiko to a modern mass where the music was played by electric guitars, in the crypt of the Roman parish of Canadian Martyrs. There, when asked about his opinion, Kiko told them: “The Church is not renewed with guitars, but with the announcement of Kerygma and the Paschal Mystery.”

Shortly thereafter, Kiko took this group of youth to a retreat, after which they asked Kiko to begin the catechesis of the Way in their parish.

Thus, on November 2, 1968, the first neocatechumenal community of Canadian Martyrs was born with 70 people.

The Way extended in other parishes and later Fr. Mario Pezzi joined the team formed by Kiko and Carmen.

THE WAY, FRUIT OF THE SECOND VATICAN COUNCIL

In 1974, Pope Paul VI, in an audience granted to the first neocatechumenal communities, recognized the Way as a fruit of the Second Vatican Council: “Here are the fruits of the Council! You do after Baptism what the early Church did before: before or after, is secondary. The fact is that you look at the authenticity, the fullness, the coherence, the sincerity of the Christian life. And this has a great merit, which comforts us greatly (…) How much joy they give us with their presence and activity! ”

All the next Popes have promoted and recognized the Way as the fruit and inspiration of the Holy Spirit for the help of the Church. Among them John Paul I, that when he was patriarch of Venice had welcomed Kiko and Carmen to begin the Way in the diocese.

Saint John Paul II promoted, strengthened and facilitated the development of this Christian initiation of adults, fostering new missionary and vocational modalities such as families in mission and the formation of the diocesan missionary seminaries, the Redemptoris Mater.

In 1990, St. John Paul II wrote in the letter Ogniqualvolta: “I acknowledge the Neocatechumenal Way as an itinerary of Catholic formation, valid for our society and for our times.”, and “sIt is therefore my wish that the Brothers in the Episcopate – together with their presbyters – value and support this work for the new evangelization”.

As the Neocatechumenal Way begins to expand as an itinerary of Catholic formation and growth in faith, the first fruits and charisms of evangelization of this ecclesial reality arise. In 1986, St. John Paul II opens and imparts his blessings to the first Redemptoris Mater seminary in Rome.

Since the Youth Jubilee of 1984 and the first World Youth Day (WYD) called by St. John Paul II in 1986, thousands of young people from the Neocatechumenal Way have accompanied the Holy Father in these gatherings. Since then, in each WYD, those responsible for the Way have a vocational meeting in the days after the meeting with the Pope, in which hundreds of boys and girls show their willingness to consider the priesthood or consecrated life.

In 1988, in the Italian town of Porto San Giorgio, St. John Paul II sent out the first 100 families to evangelize various parts of the world.

He was also the promoter of the Statutes of the Neocatechumenal Way since 1997.

APPROVAL OF THE STATUTES WITH BENEDICT XVI

Benedict XVI has also accompanied, sustained and encouraged the missionary expansion of the Way. During his pontificate, in 2008, the Statutes were definitively approved by the Pontifical Council for the Laity. In turn, the Congregation for the Doctrine of the Faith gave its doctrinal approval to the Catechetical Directory in 2010.

“I thank the Lord for the joy of your faith and for the ardour of your Christian witness, thanks be to God! (…) I thank you for all you do in the Church and the world.”, Pope Francis said at the first audience with the initiators and the brothers of the Way in 2014.

The current Pontiff has solemnly sent, on several occasions, families in mission, priests and new Missio ad Gentes to de-Christianized places in the world.

On March 6, 2015, in a new audience with the Way, he addressed the initiators and the members of the Way present in this way: “In particular I greet the founders of the Neocatechumenal Way, Kiko Argüello and Carmen Hernández, as well as Fr Mario Pezzi: I also express my appreciation to them and my encouragement for how much good they are doing for the Church through the Way. I always say that the Neocatechumenal Way does great good for the Church.”.

THE WAY IN THE PRESENT

On July 19, 2016, Carmen Hernández, initiator of the Wayalong with Kiko Argüello, died and was buried at the Redemptoris Mater Seminary in Madrid. As the international responsible team was thus left incomplete, and at the request of the Holy See, as indicated by the Statutes of the Way, Maria Ascension Romero, a missionary itinerant from Spain for 25 years in Russia, joined the team a year and a half later.

The Neocatechumenal Way is at the service of bishops and pastors as an itinerary of rediscovery of baptism and ongoing formation in the faith, and it is proposed to the faithful who wish to rekindle in their lives the richness of the Christian initiation.

The Way – whose itinerary is lived in the parishes, in small communities made up of people from different age and social groups – gradually leads the faithful to intimacy with Jesus Christ and transforms them into active members in the Church and credible witnesses of the Good News. It is an instrument for the Christian initiation of adults preparing to receive baptism.

Data of the Neocatechumenal Way

Strengthening and sustaining the Way of faith: 800 in various nations.

The international team responsible for the Way has been composed since 2018 by Kiko Argüello –responsible of the Way–, María Ascensión Romero, and by Rev. Mario Pezzi. From the origins of the Way in 1964, and until 2016, it was formed by the initiators Kiko Argüello and Carmen Hernández, and by Rev. Mario Pezzi. After Carmen’s death on July 19, 2016, and according to the Statutes of the Way, María Ascensión Romero joined the team. This team is responsible for leading the Neocatechumenal Way throughout the world, with the collaboration of itinerant teams in each nation. Among their responsibilities are those of guiding the implementation of the Neocatechumenal Way and guaranteeing its authenticity; exercising the powers indicated in the approved Statute; proceeding with consultations deemed appropriate; maintain regular relations with diocesan bishops, as well as maintaining regular relations with the Dicastery for the Laity, Family and Life of the Holy See, among others. 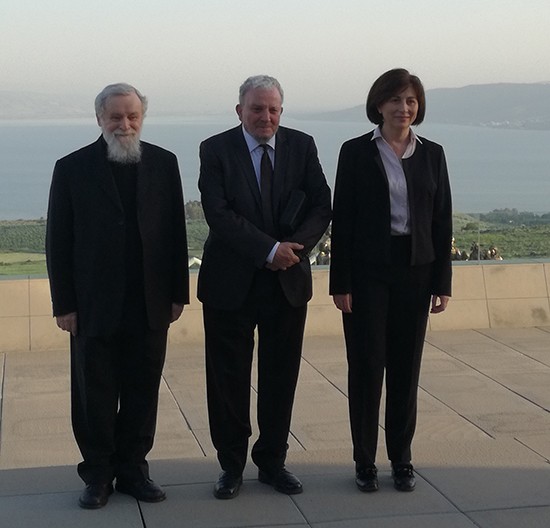